The Bob Edwards Award Gala is the signature event of the Calgary Public Library Foundation. It stands out uniquely on Calgary’s social calendar as an evening of revelry and celebration of the irascible and pugnacious.

The 2014 Gala supported Building Readers for Life at the Calgary Public Library, which provides lifelong learning and literacy for all Calgarians—regardless of age, gender or income. With public libraries becoming hubs for 21st century learning and engines for economic vitality, workforce development and an engaged citizenry, the Calgary Public Library is unrivalled in its ability to open the doors to opportunity. We believe there is no greater investment our society can make than in people's opportunity to grow, learn and prosper.

In 2014, for the first time ever, the Calgary Public Library Foundation honoured not one, but two provocative Canadians: award-winning Canadian rock musician Matthew Good and legendary singer-songwriter Ian Tyson. This is the first time that musicians were honoured in the award’s history. 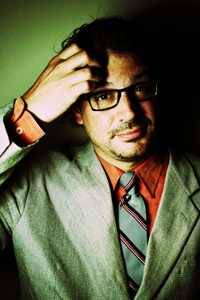 Matthew Frederick Robert Good, born June 29, 1971, is a Canadian musician whose multi-platinum career has spanned almost two decades. Between 1995 and 2012, Good released ten studio LPʼs, three EPʼs, a live album, and, begrudgingly some might claim, a ʻbest ofʼ collection focusing on the first decade of his career. All of Goodʼs full length studio releases have achieved at least Gold status, and since 1999 none have debuted outside of the top 5.

Beyond music, Good is also known for his support of various causes, most notably his dedication to raising awareness regarding mental health issues (Good suffers from Bipolarity) and human rights. For the better part of a decade, Good has written commentary for his official website focusing primarily on the subjects of militarism, neocolonialism, US foreign and covert policy, the declination of human rights post 9/11, and his opposition to the federal governmentʼs dedication to Canadian combat operations in Afghanistan. He is an advocate of Ceasefire and has, in the past, contributed to The Guardian online.

Ian Tyson, Canada’s iconic singer and songwriter turned 81 in September, but his energy remains undimmed. He is also celebrating the complete recovery of his voice, badly damaged six years ago. Ian was forced to learn, with courage and craftsmanship, to sing with what he called “my new voice.” Two superb albums, Yellowhead to Yellowstone (2008) and Raven Singer (2012), saw a wide range of new songs presented in an intimate, arresting and heart-to-heart voice. Late in 2012, after polyp surgery and vocal therapy, Ian's voice is as golden as ever. He continues to supervise his working ranch in southern Alberta as he reflects on a five-decade musical career which has produced some of the most beloved modern cowboy songs. His newest collection is All the Good ‘Uns Vol 2.

Ian has continued to be honoured for his achievements. He has received numerous Canadian Country Music Awards, membership in the Juno Awards Hall of Fame—one of five such honours with various industry organizations—three honorary Doctorates and is proudly a member of the Order of Canada.  “Four Strong Winds,” in 2006, was chosen Canada’s #1 song of the 20th century by CBC listeners.