The Bob Edwards Award Gala is the signature event of the Calgary Public Library Foundation.

The Library supports Calgarians at every stage of their life, and the removal of the membership administration fee means that all Calgarians can now access and utilize its resources. Whether teaching young families about early literacy practices, sparking a life-long love of learning in children, helping new Canadians acclimatize to our city or providing personalized learning and mentorship through programs like Learning Advantage, the Library unlocks potential. With the ever-changing economic and technological climate in our world today, individuals rely on the Library more than ever for the tools to build their skills, foster resiliency and be adaptable to change. 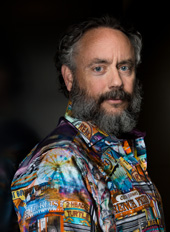 BACK IN 1993, W. BRETT WILSON CO-FOUNDED FIRSTENERGY CAPITAL CORP. (CANADA’S LEADING ENERGY INVESTMENT BANK) AND HAS SINCE GONE ON TO DEVELOP EXTENSIVE HOLDINGS IN THE ENERGY, REAL ESTATE, AGRICULTURE, SPORTS AND ENTERTAINMENT INDUSTRIES. NOW A DRAGON EMERITUS, HE SPENT THREE YEARS AS A “FAN-FAVORITE” ON CBC’S HIT REALITY TV SHOW, DRAGONS’ DEN, WHERE HE ESTABLISHED HIMSELF AS THE ALL-TIME LEAD DEAL-MAKING “DRAGON.”

Brett has received Honorary Doctorate of Laws Degree’s from both the University of Saskatchewan (2015) and Royal Roads University (2010). He was also awarded the Order of Canada (2011), granted The Queen Elizabeth II Diamond Jubilee Medal (2011), and inducted into the Saskatchewan Order of Merit (2012).

The Bob Edwards Award Gala exudes a luxury and elegance evocative of a different time and era in our city. Embark on the black tie evening with a pre-dinner reception replete with delectable hors d’oeuvres and refreshing spirits at our host bar stations. Enjoy a lively guitarist performing at the reception, followed by a tasting of the 2015 Bob Edwards spirit selection and an elegant four-course meal. Your evening will be made unforgettable by your table host, a prominent writer, filmmaker or musician from Calgary’s creative community.

A Calgary tradition, the Bob Edwards Award recognizes provocative individuals who are not afraid to speak their minds. Come prepared to quench your thirst for fine food, spirits and lively, through-provoking conversation.